Forage is the pre-skilling platform for early talent.

Use an economic downturn to raise retention, nurture skills, and reduce expenditure.

Economic downturns create opportunities to innovate. Here’s how talent teams can use this time to drive change that will set up their team, and organization, for success.

In an economic downturn, most companies bunker down: go lean, pare back, and ride out the storm. In rare instances, companies use it as an opportunity to drive bolder changes – setting up their organization’s for success for years to come.

Famously, product innovation has flourished in leaner times. Netflix launched its world-first streaming service during the Great Recession – and did so resourcefully by forming partnerships with the products that their target users were already using, such as Xbox, rather than investing in new channels to tap into their homes. Companies like Mailchimp boldly adopted a “freemium” option, and ended up growing their user base five fold.

Even in early talent recruiting we’ve seen radical, lasting change prompted by harsh conditions. The pandemic halted campus recruiters’ in-person activities and created a huge pivot to virtual engagement. Two years on, teams that had been attending an average of 48 career fairs in a single year are now questioning their efficacy, accessibility, and resource efficiency.

“They’re an endless wedding receiving line where it’s really difficult to have a conversation that is at all meaningful for the candidate and the recruiter… If I have to write a check to every place that I’m going to participate, I’m probably going to be forced to be more selective. And if I’m more selective, I am now in that situation where I’m going to core schools.” Laura Mills, AVP HR at Cognizant

So what can the world of early talent recruiting take from this?

Talent teams have the big task of maintaining a sustainable pipeline of high-quality candidates, justifying the costs of attracting, engaging, nurturing, and hiring talent, keeping retention rates up, and implementing hiring practices that empower DEI&B initiatives.

Some of these challenges are inescapable. The new generation of talent has a more transient view of their future employers than previous generations, and talent teams can’t control that.

Others, however, are ripe for an overhaul – and making the changes are easier than you think.

What can talent teams do?

1. Use virtual platforms to reduce in-person expenditure while expanding your reach and engagement with early talent.

If your team is thinking of prioritizing in-person engagement yet again, take the time to take stock on why. Is it forcing you to descale your reach, and target only ‘core’ campuses?

Instead, reframe virtual platforms as not simply a bandaid used over the pandemic, but as a scalable, accessible, and interactive channel to early talent.

Employers like Walmart, SAP, and Cognizant do this through virtual job simulations. By offering open-access simulated work experiences, they generate inbound connections with early talent. And, conveniently, these simulations are integrated into coursework across hundreds of colleges worldwide – creating on average nearly 5 hours of employer brand immersion per simulation (a lot more than a booth at a career fair, to say the least!)

There’s nothing worse than thinking you’ve met your hiring numbers, only to have a handful of new starters opt out last minute. Actually, there is something worse – when they’ve gone to a competitor.

Unfortunately, the answer to this issue isn’t showering candidates with swag. That’s because it approaches the problem from the wrong side: trying to generate commitment once they’ve come to the end of the pipeline, rather than selecting for commitment throughout the pipeline.

The answer? Giving candidates that truly want to work for you the opportunity to stand out amongst the ocean of applicants.

This is where positive friction comes in. Employers like JPMorgan, Deloitte, and BCG use the completion of their virtual job simulations as a signal of a genuinely interested candidate – because a candidate that has spent 4-8 hours completing a job simulation in their limited free time is a demonstrably high-intent one.

That’s why candidates that have completed their simulations are:

3. Preskill to easily and scalably build a pipeline of high quality candidates.

The growing skills gap doesn’t go away with an economic downturn. In fact, addressing it within the next few years remains a critical priority – not just for employers, but also global institutions like the World Economic Forum.

All to say, there is a powerful financial incentive to prioritize solving the skills gap sooner rather than later. And talent teams are uniquely placed to make a major impact.

Talent teams across the globe from employers like HSBC, AON, Lululemon, Electronic Arts, GE, and the big four consulting firms use preskilling to bridge the gap between study and work, leaving preskilled candidates better equipped to hit the ground running from day one.

You can learn more about preskilling here. TL;DR:

Yasmin Monfared is Forage’s Research Director. She is responsible for leading and collating research and insights across Forage’s student, educator, and employer community to help recruiters enhance and evolve their talent strategies.

With Forage’s virtual job simulations, students can build the skills and confidence they need for career success – before they apply for the role. Each program replicates work at a top company and helps students develop the tools necessary to thrive at that organization.

Get The Latest Resources In Your Inbox

You can unsubscribe at anytime. 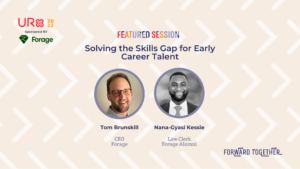 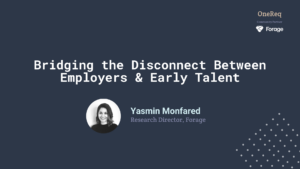 Bridging the Disconnect Between Employers and Early Talent 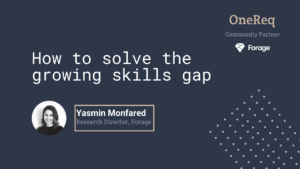 How to solve the growing skills gap

Bridging the Disconnect Between Employers and Early Talent

How to solve the growing skills gap

The Community for Recruiting Leadership.